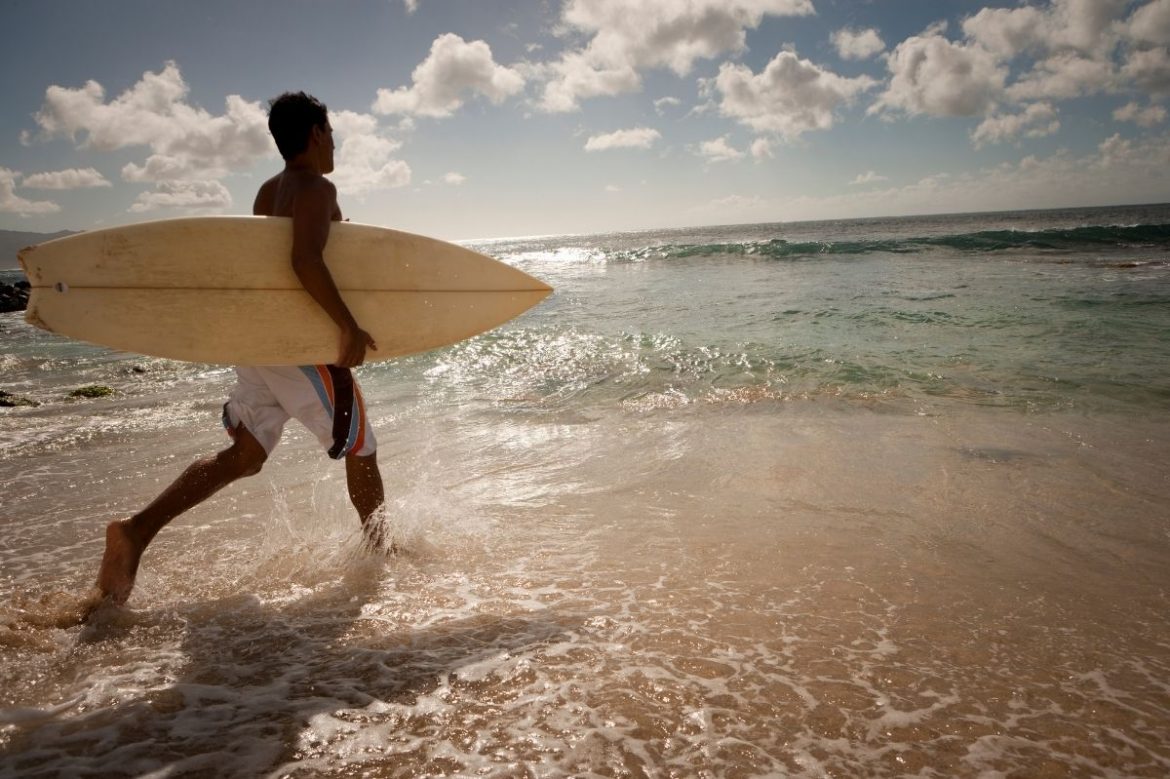 In the world of surfing, everything revolves around the waves. Finding a beach with perfect conditions is a feat that requires patience and this ritual includes checking the weather forecast, accessing specialized websites, and, then, hitting the road. But, in times of such specific applications, the question that hovered among surfer friends Felipe Baracchini, Felipe Barros, and Adriano Vasconcellos was: “Where is that app that will show where the best waves are and become a social tool?”.

The answer didn’t exist and they took it upon themselves to create it. This is how Broou was born. Felipe Baracchini, 32, is an advertising professional who graduated from ESPM and worked at large agencies such as Talent and Africa until becoming a project manager at Almasurf magazine, where he stayed from 2008 to 2013.

“It was the dream job. I did some crazy events, I knew a lot of people,” she says. With a knack for organizing tours, he even had a production company, Vamoaí, with which he played a concert with the band Mundo Livre S / A, in São Paulo. From that experience, in addition to the relief that it worked, he also suffered a little trauma: “It was enough for me to know that I didn’t want that”. Thinking about what he really wanted led Baracchini to bet on Broou’s idea, and he followed the classic script of the ultra-confident entrepreneur: he resigned and sold the car, raising 20 thousand reais to hold the bills and start the startup.

Available for iOS and Android, the platform today shows which are the beaches – or rather, spots – with the best conditions for surfing. The user enters, searches for the desired location, and has data such as wave size, swell, and wind direction in real-time.

The project’s first partners were right. Felipe Barros, 32, a college classmate and TCC duo, was another surfing enthusiast. After six years of hanging around agencies and a lot of insistence from his namesake friend, he was convinced to work as an art director at Almasurf. From there, he would leave his steady job to dedicate himself to Broou, somewhat inspired by his wife, who is also an entrepreneur. “It was nice to have an example at home, but that didn’t make it any easier,” he says, speaking of the preoccupation with the bills at the time.

The group of founders also included Adriano Vasconcellos, 42, director of Hard Core magazine and fanatic about the sport. Adriano Wiegmann, 28, would be the strategic addition to the scientific part of the business that was being formed. A childhood friend of Baracchini’s, he graduated in Oceanography at the Federal University of Rio Grande and began to study forecasts for the sea. Felipe says that, from then on, they started looking for people to get into the business. Founder of ON Interactive, André Brunetta took care of the technology part. “Then Caio Matoso and Rodrigo Mendes came to take care of the design and creation”, he says. At one point, the dream team they already had. What they didn’t know is that this wouldn’t rid Broou of the first broths (as the falls that almost drown the surfer are called).

It felt right, but it went wrong

It’s normal, when you undertake something you love, to underestimate the difficulties. This results in fear and frustration. That’s what the partners felt when they realized that the idea — an app that showed the wave forecast created by surfers and for surfers — by itself could not be financed and that the path would be much longer until they started earning salaries accordingly. with your expectations and experience.

“We didn’t know the importance of investing in media. We think that the app would have 30,000 downloads right away,” says Barros. Other than that, the excitement was so great at the beginning, that any opportunity that appeared to expand the business, which was not even stabilized, they embraced. A tour with musician and surfer Donavon Frankenreiter through Brazil? Yes! A t-shirt brand, custom cap? Sure! While they said yes to everything, they didn’t stop to think that their product, after all, the app, wasn’t even working the way they wanted.

The desire to embrace the world is evident in this story: Felipes’ duo had the dream of launching the app in Hawaii, during the Pipe Masters, the most iconic surfing championship on the world circuit. They planned the trip, used their miles for the tickets, and asked for food and lodging allowances for Broou’s first investor, Eduardo Cury (Baracchini’s cousin). Then, they embarked on a 20-day trip to the island of Oahu. Once there, they presented the product to Brazilian Gabriel Medina (2014 world champion) and even appeared live on the championship broadcast.

In theory, success was almost guaranteed, right? Far from it, as Baracchini recalls: “It was total guerrilla warfare. The app was not what we wanted and we still didn’t know how to make money. Our mission was almost to be God: to offer products, content, and services to surfers and surf lovers. It screwed us up.”

The official launch of the app took place in May 2014, but problems were piling up. The chat area, which was supposed to be used for users to book their round trips (trips to the beach that do not include an overnight stay) did not work properly. The Android version still needed to be developed. In parallel, Adriano managed to create and coordinate a team of five oceanographers focused on studying the condition of the sea on the beaches registered in the application. The team was doing well, despite the startup’s administrative difficulties. But, in the following year, everyone would feel the consequences of having launched a product, and a company, not so mature. In 2015, the partners distanced themselves, Baracchini followed the terminal phase of his father’s cancer, and Barros lost a loan and moved to his mother-in-law’s house. They still didn’t know how they would make money from it.

Tidying up the house to start over

The startup trembled at the base. But nobody gave up. Each one went back up the board in their own way. Adriano packed a master’s degree in Coastal Engineering, Barros collected freelances and returned to the market for a few months, and Baracchini looked for a coach to understand once and for all what they had done wrong. “I told him everything, we started having a Skype meeting every 15 days and I realized that my role in the project was to make everyone do their best. So we decided to give due value to the most scalable: creating a community based on wave prediction. Then we followed a marketing plan”, he recalls. It is this plan that, today, is open 24 hours a day on your computer screen.

Tidying up the house was essential to achieve recognition not only from surfers – today Broou has eight ambassadors who help to publicize the brand – but also from the ecosystem of digital entrepreneurs. One of the results of this movement is that Brook was chosen as one of the 100 most interesting startups for the market by the 100 Open Startups Movement. By the end of this year, along with the break-even forecast, 100,000 reais will be injected into the company, twice as much as in 2015.

Brook still doesn’t invoice and that’s why it was agreed that every month, the 13 partners (including the team of oceanographers) make a contribution. Today, too, the functions of each are better defined. Also, the goals are now doable. “Without media investment, our growth in the number of downloads was 7% per month. Now we expect at least 10%”, says Barros. To achieve this rate, they also understood that talking to the user was essential. “When we are going to do some updates, we talk to groups of surfers and test everything beforehand. You could say that we have renewed our vows.”

To confirm the startup’s new breath, a new version of the app will be launched in May, with two new functions: Peak Conditions Report (for the user to validate the wave predictions he found on the beach) and a button so that it asks for the registration of a new peak. “Our data is a virtual forecast, after all. To analyze better, we need someone on the spot, to be as reliable as possible. Now the surfer will be able to determine the size and quality of the waves. Then he can write about the water, the crowd, etc”, says Adriano. And as charging for the use of the app is out of the question, the partners will test mobile ads to establish a business model.

The information collected by the forecaster’s team also opened doors for three partnerships. With Red Bull, Hard Core magazine, and the Off channel (on cable TV, specializing in outdoor sports). For now, Brook offers content and a widget wave prediction in exchange for content. “Now that the widget service is consolidated, there will be a monthly fee to cover operational costs”, says Barros. The Brazilian coast is well covered, with 800 registered beaches, say the founders. But the app’s performance is global, with users in 50 countries. In the United States, the tool is powered by free data from NOAA (National Oceanic & Atmospheric Administration). “The goal is to hit 200,000 downloads in the first half of 2017. We want this to be an indispensable tool for any guy who catches a wave”, says Baracchini. Now, with more favorable conditions, Brook takes her strokes with more confidence.