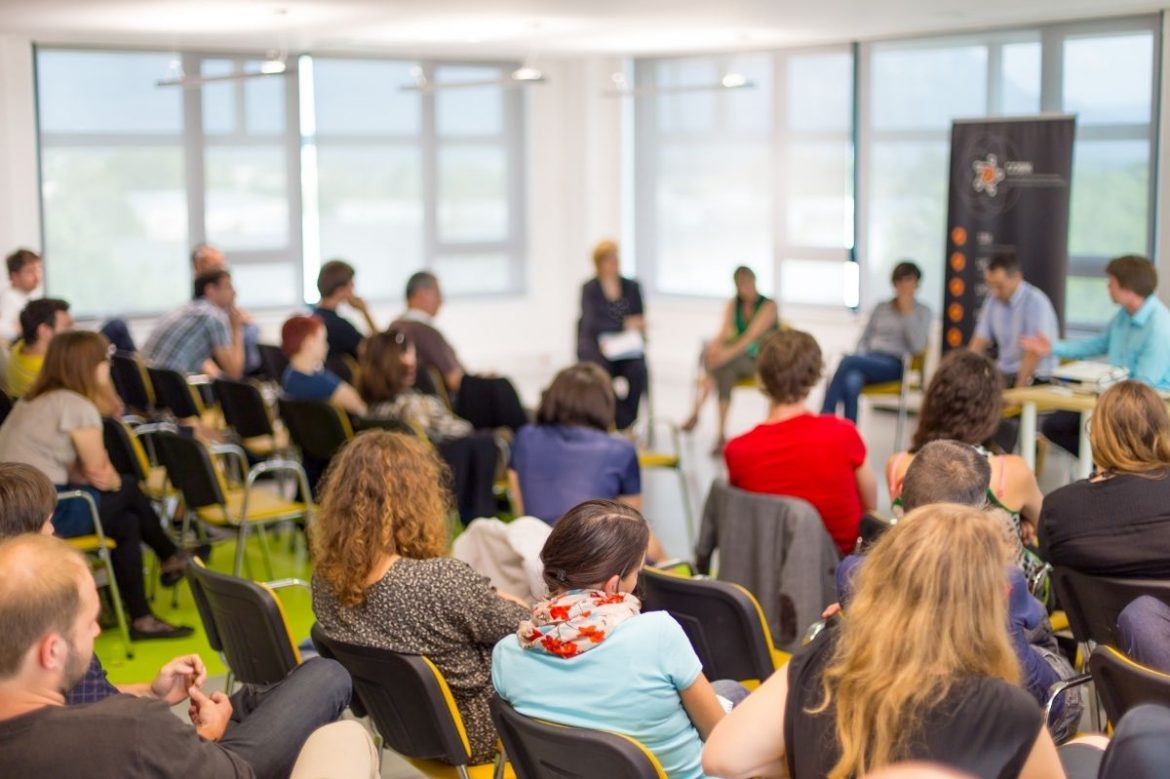 Open Space Technology, The DRAFT portal is the series that explains the main words in the vocabulary of entrepreneurs in the new economy. These are terms and expressions you need to know: whether to learn about the new tools that will boost your business or to help you speak the same language as mentors and investors. Today’s entry is  open space technology …

What do you think it is: Meeting of people in the open.

What it really is:

Open Space Technology (OST) is an approach to meeting groups (which can range from five to two thousand people) that, with a certain purpose, self-organize within a simple, non-hierarchical structure. “What makes Open Space different from most facilitation and dialogue tools is that the participants themselves define what will be discussed within the context presented”, says Thomas Ufer, a graduate engineer in Environmental Management and Business in the Energy Sector. who works with facilitation of participatory processes at CoCriar , a company of which he is a co-founder.

In practice, and briefly, it works like this: arranged in a circle, the group meets to hear the facilitators explain the purpose of that meeting. On a wall, a blank agenda matrix (as if it were an Excel spreadsheet) is placed, which will be assembled by the people of the group at the next moment, called “marketplace of ideas”: this is when each one suggests the theme, place and what time do you want to talk. Once the agenda is closed, each topic proposer (called “host”) goes to the chosen place to conduct the conversation. The rest of the group chooses the conversation they want to participate in.

“People go where they want and balance happens naturally, as generally the most important issues are addressed and the less important ones are not,” says Ufer. He explains that there are some rules in the approach , but the main one is the so-called “Law of two feet”: “It says that if you are in a group and you realize that you are neither contributing nor learning, you should use both feet and go to another room. It is the golden law of Open Space because it gives people complete freedom.”

American Harrison Owen , photographer and organizational consultant specializing in facilitating the development and transformation of social systems. His academic background is centered on the nature and function of myth, ritual and culture. In the mid-1960s, Harrison Owen left academia to work with a variety of organizations, including small West African villages and urban communities in America and Africa.

He then discovered that his study of myth, ritual, and culture had direct application to these social systems. In 1977, he created HHOwen and Company, of which he is president, to delve deeper into the culture of changing organizations. In 1997, he released Open Space Technology: A User’s Guide , which in the Brazilian edition was titled Productive Coffee Break.

When it was invented:

In 1985, Harrison Owen organized, for the third time, the Annual International Symposium on Organization Transformation , in Monterey, California. In the previous two years, the conference had taken place in a traditional way and when reading the reports Owen realized, through the feedbacks , that despite the long and detailed planning, the real emotion had happened in the coffee breaks of the event. And he decided to do it differently in the third year: the participants would only know the beginning, the end and the theme of the conference.

There would be no agenda, planning committee, management committee. It would just be the 85 people seated in chairs arranged in a circle. Two and a half hours later, there was a fully planned three-day schedule and the first Open Space Technology event was born. The trademark was not registered by Owen, who claims to have discovered, not invented, the process. “It’s an approach that’s been around for years. Honestly, I suspect it’s been there since Homo sapiens came together. It’s just that our modern wisdom has overshadowed what we already knew . “

According to Thomas Ufer, Open Space is for collective decision-making and construction processes. “There are many applications. A classic example is the use in strategic planning processes to involve large teams. It’s a very useful tool that gets input from all participants, he says.

Petrobras, Santander, Natura, Instituto Ethos, GIFE (Group of Institutes, Foundations and Companies) and CEBDS (Brazilian Business Council for Sustainable Development) have already used Open Space through CoCriar. Ufer says that, within hierarchical companies, people in the area of ​​human development are looking for an approach. “They are already seen within the organization as progressive and want to take the approach inside the company”, says the engineer.

The good effects, according to Ufer, are more intentional than side effects. “It allows for the emergence of new ideas that would not normally emerge in a controlled environment. It also generates autonomy and a very great empowerment in people, who leave very committed”, she says. As for the negative side effects, he states that the approach needs to be measured in hierarchical cultures that are not prepared for the process. In this case, if Open Space generates apathy (due to the difficulty of people positioning themselves freely), it can create discomfort. “Bosses can understand people’s attitude as interference and disrespect. And employees can start to question the hierarchy when they realize that it is not so essential to the functioning of the work.”

Organizations and people with more controlling and centralizing profiles. “By promoting extreme freedom, it takes people who have a control profile to a place of fear. Open Space evokes the fear of loss of control,” says Ufer.

Also Read : How Technology Can Be At The Service Of Health