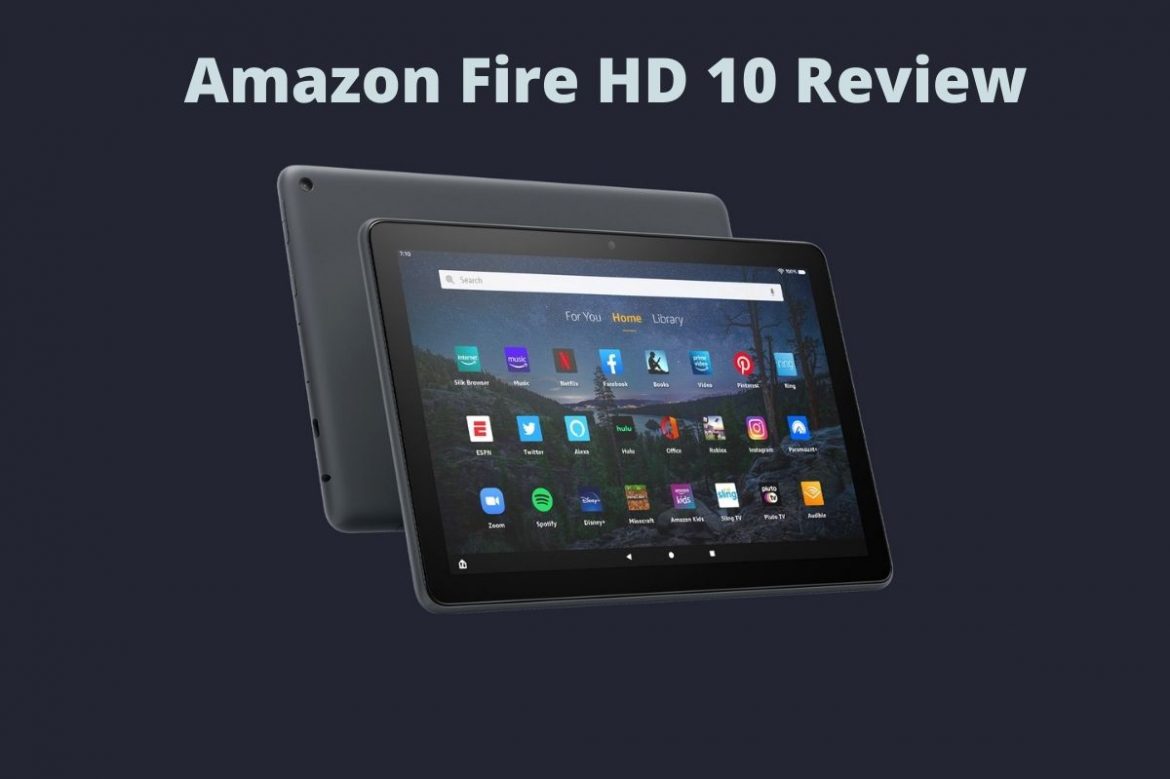 Amazon Fire HD 10 is the latest tablet from the US House, just launched on the market and characterized by an interesting display and an affordable price, much better if in synergy with an Amazon Prime subscription.

We put it under pressure, let’s see how it went.

The Kindle Fire line, a color tablet with a proprietary operating system derived from a dialect of Android, not to be confused with the most famous Kindle eBook Reader line, is currently characterized by three models: a super accessible 7 ″ tablet, one 8 “with higher resolution display and the model we are talking about today, top of the range, with 10” Full HD display.

The reference market sector is the entry one, and in Amazon’s idea, it is possible to have a tablet that works (above all) for video, audio, web browsing, and some Apps/games, even if the presence of Office and Teams opens up to notable other opportunities.

That the dominant color of the Kindle Fire line is orange can be understood from the box that arrives, in cardboard, where inside there is the actual tablet, the USB-C / USB-A charging cable, and a small USB power supply.

For those who need a USB-C / USB-C cable (for MacBook Pros that do not have USB-A), on Amazon, you can only choose which one.

Once turned on, the initialization procedure is very fast, basically, it consists of a few screens with the request for your Amazon account and you are immediately operational. If like the writer, you had another Amazon Kindle, the system offers you to re-download the Apps you purchased previously.

Despite being a budget product, the accessories for the Kindle Fire 10 are not lacking: here an external keyboard

From the hardware point of view, it is a tablet with dimensions of 247 x 166 x 9.2 mm (465 grams without case): all the connectors and buttons are placed on one of the short sides, like the one for USB-C charging, the volume and power buttons, the microphones and the headphone jack, except the MicroSD card slot which is just next to it.

The edges of the display are generous, about 1 cm on the short side and 1.3 cm on the long one, where the front camera (2 MP) is also housed, as opposed to the rear one (from 5 MP with HD video recording to 720p), placed near the vertex.

If the edges and thickness are generous (but the price range is always taken into account), the display is really a pleasant surprise, a 10.1 “(25.6 cm) Full HD 1080p that can be looked at as much in the dark as at the light: we will come back to this even later, but the screen was really important in watching some films and TV series during the trial period, both on Amazon Prime Video and on Netflix and has undermined the bed our iPad Air of 2019 both in terms of display and audio.

In this succession, it must be said that the Amazon Fire HD 10 screen is wider and offers a better display than that of the 4/3 iPad, despite having a formally lower resolution.

For those who do occasional smart working, it is a boon, as well as for those who use it only for some streaming

In fact, two small stereo speakers stop on the long side and offer more than good audio, compared to what the integrated technology of a tablet can offer, and in the end, they are better than, in fact, those of an iPad which instead offers audio all on the short side (and when watching the film, with the tablet horizontally, the audio is only on one side).

The internal capacity of the tablet, which in the cheaper version is just 32 GB, can be expanded thanks to MicroSD cards to obtain necessary space (up to 1 TB) both for offline viewing of movies and TV series and for photos and videos. although in this case, it is useful to remember that Amazon gives unlimited cloud space for photos to all those subscribers to Prime.

A note for the battery: capacity is important, admittedly up to 12 hours of reading and browsing, in our case a little less but with streaming movies and some games.

The battery basically promises a day of non-stressful use of the tablet, which recharges overnight (about 4 hours): the stand-by hold is not great, and if you don’t use it for a couple of days, you need to recharge it.

The Amazon Fire HD 10 boot screen with advertisements. It is not invasive at all and is worth the discount on the price

The power under the hood is guaranteed by a 2.0 GHz Octa-core processor with 3 GB of Ram, enough to run the entire software park.

Supplied with a Bluetooth 5.0 chip for any type of peripheral, from headphones to, why not, one of the various devices with integrated Alexa (such as an Echo Show 8 to stay on the Amazon theme, or a more classic Bluetooth speaker ) to listen to the audio music or enjoy various integrated services with or without a smart home.

Are you passionate about music? Don’t miss XiiaLive Pro, which offers you plenty of themed radios, from the best of eighties pop to seventies rock

The software onboard during the test was FireOS 7.3, which is basically a heavily customized version of Android 9 Pie, available in two versions, depending on the form of purchase.

Like all Kindle Fires, the Amazon Fire HD 10 is also offered in a version with or without advertising: the difference lies precisely in a small saving on the purchase price provided, however, to give the parent company greater control over the commercials in some points, like the lock screen, but otherwise, the two configurations are identical.

Not being a pure Android, Amazon Fire HD 10 does not have the Google Play Store, the Google App Store, but offers a proprietary AppStore, where developers post the Apps, which are identical to the Android ones, only veered to a different App Store. . Many developers have embraced this opportunity, but not all: a quick search found pivotal apps like Dropbox, Netflix, Twitch, Parallels Access, Spotify, Facebook, Twitter, Plex, Disney +, the Discord chat and the interesting XiiaLive Pro, plus all of them. those of Amazon (such as Prime Video, Kindle, Amazon Music, Amazon Photos, and Alexa).

To these have been recently added those of Microsoft, far from underestimated, such as Office, OneDrive, OneNote, Translator, and Teams.

However, some important apps are missing such as Railay and Mediaset, Youtube, Evernote,

Telegram, and Linkedin just to give some examples of the first that we have not found, and then obviously many top Android games.

Clearly, it is possible to manage some of these services via browser (Silk, the pre-installed browser is not bad, there are alternative browsers, none of them famous) or on alternative apps (especially for YouTube, there is no shortage of proposals), but here and the lack of software support like for Android is felt.

Also Read : AirTag Review: You Can’t Miss It If You Have An iPhone

We used Amazon Fire HD 10 for a few weeks with great pleasure in various areas: right from the start, he supported us in everyday work as a “second display” for Teams, as an aid in webinars as well as an organizer in chats (not a real your second display, therefore, but a device where you can keep Teams open permanently, while you did something else with your computer).

The screen timeout is a maximum of 30 minutes, but with the pace of chats and calls, for us, 30 minutes is a lot.

Here’s how Amazon Fire HD 10 shoots. It’s not a smartphone, but it can go if necessary

Here and there we also used it for various services, from chats on Discord on Diablo or watching some streaming on Twitch, from the morning use of Twitter and Facebook to the evening use of Amazon Prime Video and Netflix, where the tablet he was more exalted.

A little for the thickness a little for the plastic coating, we are inclined to think that the Amazon Fire HD 10 is a fairly robust tablet, and although the weight is not indifferent, it will look good this summer in a bag at the beach with some books or movies to enjoy offline, but we highly recommend purchasing a case to protect the display. We did not have it and we missed it, as well as we recommend the use of a MicroSD, especially for those who opt for the 32 GB model which is very few.

The processor power appeared adequate for all tasks, with no problems with the use of the Apps for movies (with maximum FullHD, since this was the resolution of the display, we did not try larger movies), and even with some documents in Word things went well: some imperfections in the use of Teams, but more on the change from one screen to another than on the actual content.

Only note: we would have preferred the volume on the long side, separated from the other connectors, to avoid turning off the display every time we raise or lower the video, but it is clearly a matter of habit (more black on black, at night it is not easy to push the right button).

Amazon Fire HD 10 is a good tablet, inevitably the best of the Fire family, the one where compromises are minimized and, for some specific uses (watching movies, light browsing, sporadic use of Office, streaming and email), it really turns out a deal. The discount for advertising seemed good to us, it is not invasive and basically lasts that second before unlocking.

To read books is good because it is backlit, but perhaps for this specific function a dedicated device is better (especially for autonomy) and it is also excellent as a “hunchback” on the desk, next to a computer, for the smallest operations (like Teams, in our case, or to monitor a stream).

Far from the top of the market for design and performance (and also for software availability), it is a good balance between convenience and use, much better than many other cheap android tablets, for which fate becomes doubtful after a few weeks, while those who buy a Kindle Fire knows what it takes.

Amazon Fire HD 10 is available directly from the Amazon page in a version with or without advertising. The 8 “HD model and the 7” entry model remain on the market.

Also Read : iMac 24 M1 Has Arrived, First Impressions Of Use