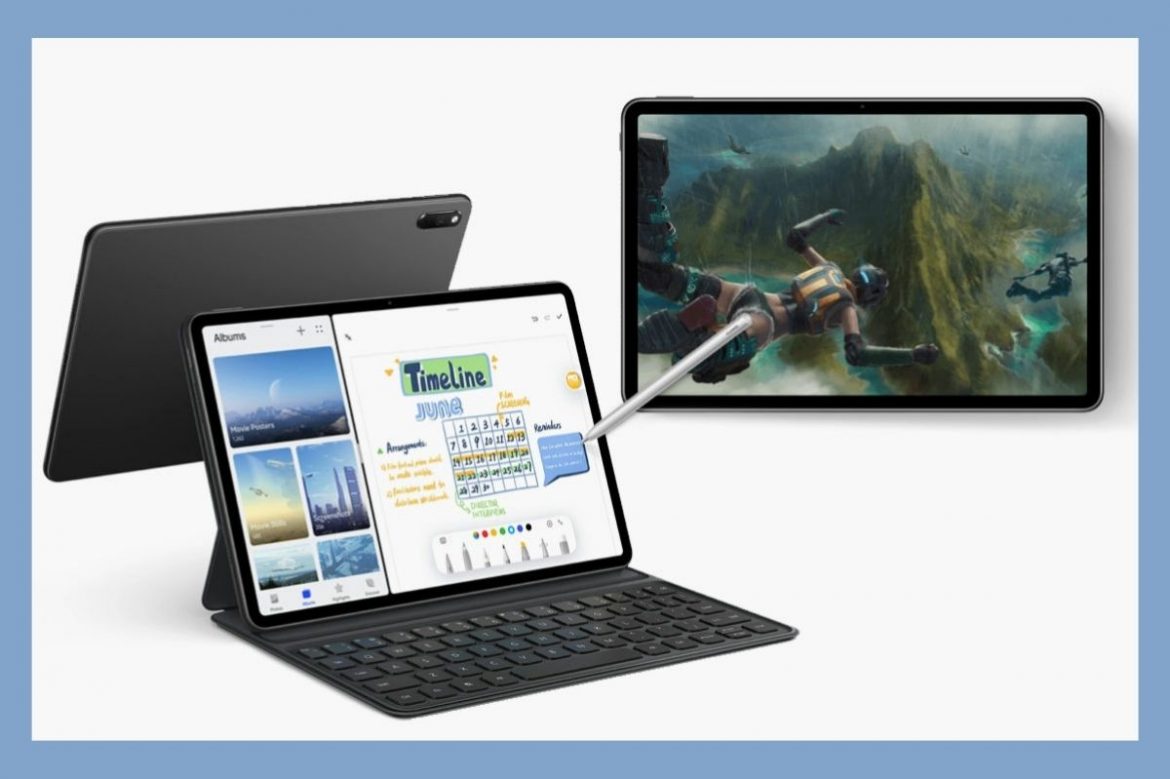 HUAWEI MatePad 11,Huawei announced a variety of new products online. I have already delivered breaking news, but since I have actually touched various things, I will introduce the impressions together.

11-inch tablet ” Huawei MatePad 11 “. This was really good. First of all, this tablet is a tablet equipped with HUAWEI’s original operating system “ HarmonyOS”. This is the first HarmonyOS-equipped device to be released in Japan!

A harmony commemorative photo with a smartwatch will be introduced later. No, I’m deeply moved.

By the way, the finish of HarmonyOS is close to that of iPadOS. You can also connect a mouse and keyboard, like a split view. The operation was light, and I didn’t feel the difficulty of attachment and the light stress unique to the original OS. After all, it’s the one that most people who touch the iPad can understand.

Not only Huawei mice but also third-party mice can be connected.

A stylus “HUAWEI M-Pencil (2nd generation)” and a dedicated keyboard cover. The keyboard is a pantograph type with a key pitch of less than 1 mm, and I was able to type harder than the “Smart Keyboard Folio”. Excellent as an input device.

And what surprised me was that the refresh rate could be switched and that it was compatible with 120hz. This HUAWEI MatePad 11 is said to be the first tablet sold in Japan that supports a refresh rate of 120Hz other than the iPad OS. In addition to 60 or 120hz at all times, there is a mode that automatically switches on the OS side. I think it’s 120hz when watching games and videos, and 60hz when normal.

The color of the main body is light blue. Two speakers supervised by Huawei’s familiar Harman Kardon are mounted on each side of the main unit. The power of the volume was also higher than the iPad Pro.

To be honest, it can be said that there is almost no anxiety about the software of the original OS. The problem is the compatibility of both the original app store and software and hardware, but I wonder if it can be covered if it is used for a limited purpose such as browsing at home, watching videos, or inputting characters externally. If you are using a Huawei smartphone, there are also benefits of cooperation.

Also read : How To Maximize The Productivity Of Your Apple Watch?

A smartwatch That Can Measure Body Surface Temperature

Smartwatch ” HUAWEI WATCH 3 sports model and the classic model of” a new appearance. It is the first smartwatch equipped with HarmonyOS, and it is also the new smartwatch that has changed its design for the first time in about four years.

In terms of design, it is equipped with a crown for the first time. The 1.43-inch 326ppi organic EL display is very beautiful and has good touch sensitivity. The battery lasts up to about 14 days. It also supports hand gestures, and you can answer the phone by holding your fist and opening it.

The “HUAWEI WATCH 3” has an estimated market price of 50,380 yen for the sports model and 54,780 yen for the classic model, and is scheduled to be released after August 2021. It feels like a simple and strong smartwatch has come out.

Completely wireless earphone ” HUAWEI FreeBuds 4 ” is now available. This is the first evolution in about two years from the previous model, and I have the impression that this has also been strengthened overall.

HUAWEI FreeBuds Pro” was a canal type, but this series that Pro does not have is an inner ear type for generations. It is an open type that does not block your ears, but it is equipped with active noise canceling. So-called AirPods with noise canceling.

Although the accuracy of Neucan is not as good as that of the canal type, I felt that the ambient noise and the voice of the person in front of me were certainly reduced. After all, this type of earphone is easy to put on. There is no feeling of pressure on your ears, so you can put it on and take it off quickly. Also, although it was a shiny material, it didn’t feel very slippery, and I felt it was harder to drop than earphones with similar designs.

The built-in driver is 14.3mm. Big! Even the app can set the emphasis on bass, so it covers the weaknesses of the inner ear type, which tends to be unsatisfactory for bass.

“HUAWEI FreeBuds 4” is scheduled to be released on July 30, 2021 (Friday), and the estimated market price is 18,480 yen. If you like the openness of the inner ear type, I think it’s worth trying.

A new laptop has also come out. “HUAWEI MateBook X Pro 2021” is a powerful laptop equipped with the 11th generation Core i7. The display size is 13.9 inches, which is slightly larger than the 13-inch machine. Since it is Windows, it also supports touch displays.

This child has a nice color, isn’t it? The satin-like texture is also comfortable to touch.

The trackpad is the same type of high-end as the so-called MacBook Pro, with haptics everywhere you click. It has eight built-in pressure sensors, and when it detects a certain pressure, it returns vibration ( maybe Sensel ?).

A large Screen Is Indispensable For Work Efficiency!

Big, but maybe lighter than I expected? It weighs about 1.5 kg, but I think it’s easy to hold for a laptop of this screen size. I think it’s just because it’s thin.

Positioning is an entry model, but the keyboard is made of rough material and it supports fingerprint authentication, so it does not have a cheesy impression. Since the GPU of the Core i5 model is Iris X graphics, it seems to be light and can be used for games.